I first heard Tell me your story……. When at the Explain Pain 3 course last year. Professor Peter O’Sullivan used these words as an opening line when conducting an initial consult with Russel a member of the general public. Professor O’Sullivan was not just interested in the condition, but wanted to know Russel’s 35 year journey with back pain and spasms. Prof O’Sullivan wanted to hear what Russel had learnt on his journey, what he had lost, emotional state, fears, can this be cured and what Russel would love to do. After asking Russel “tell me your story” Prof O’Sullivan did not speak again for the next 6 minutes.

“When you talk, you are only repeating what you already know. But if you listen, you may learn something new” (Dalai Lama)

Even though he did not speak during this period, Prof O’Sullivan showed with his postures and behaviors that he was curious and interested in the story and the journey. Then over an hour a masterclass of Motivational Interviewing, reflective listening, Mindfulness and exposure-based learning. Russel had been on the merry go round of seeing practitioner after practitioner and no one had listened to his story, I mean really listened. He had received a lot of conflicting advice over the years that left him frustrated and lost. The pain was always on his mind and was consuming his world. Eventually this led to surgery 2 years ago and he had the expectation that the surgery would fix his problem.  Post-surgery the pain and spasms were better, but they were still occurring.

Russel talked about what he had lost from being this strong fit man to now someone who was afraid to bend over, being socially isolated for being the guy with the “Bad Back” and to be careful. He wanted to get back to being active and to be able to play with his grandchildren, kicking the footy, running and golf.  Avoiding these activities had taken away a lot of what he valued and made Russel who he was, but wasn’t really helping reduce the “Episodes” of spasms and pain. Russel’s self-coherence was lost and the representations of himself were not making sense (Thompson 2019).  What made Russel, Russel was being eroded due to the pain.  Peter reflected then back what he was hearing from Russel.

Professor O’Sullivan then asked Russell, what were three things he feared most? They were bending, bending and twisting and lifting. Russel had avoided bending through his spine for 20+ years and always leaned forward with a stiff back because this is what he was told by health professionals in the past. Professor O’Sullivan then put a duster on the floor and wanted Russel to bend and pick it up. The fear in Russel’s eyes as he bent down was intense, but Russel was shocked to find that it did not hurt, and he could do it. This created a large expectation violation and he and Peter repeated this action over and over again. During the process Peter got Russel to do Mindful breathing to decrease the sympathetic arousal and decreases the safety behaviors like holding his breath, bracing and focusing on his back.  These safety behaviors can trigger the body to be on alert and increase hypervigilance.

Prof O’Sullivan then stepped up the bending by including flexion and a twist and at this moment there was an audible gasp from some of the 300 practitioners in the room. You could see Prof O’Sullivan was not happy with this, as the practitioners were fueling the belief that bending and twisting was dangerous. To everyone’s surprise Russel was able to bend and twist. Through this entire encounter Prof O’Sullivan watching Russel’s behaviors and helping Russel to become aware of the Safety behaviors he was using to try and avoid the pain (Strategies that were most likely increasing protection behaviors like pain and spasms).  We call this type of behavioral experiments exposure-based learning and was a vehicle for Russel to learn about pain through experience, rather that lecturing to him. Note: Exposure based learning can be effective but if done to early and with a practitioner who is not confident can increase safety behaviors and move you away from what you are trying to achieve. When doing this exposure-based learning the practitioner needs to be confident.

Prof O’Sullivan then mapped out Russel’s journey through the commonsense model on a white board. This was validating Russel’s experience, showing that he had been listened too, and to show why it was commonsense approach to avoid and brace his back.  As this is what he had learnt on his journey based on what he was told by healthcare practitioners and what he had learned through experience.  Unfortunately, a lot of these safety behaviors were fueling pain and muscle spasms and were keeping the body on alert and making Russel hypervigilant.  They then talked about changing some of the beliefs around his back pain, based on what he had learnt through experiential learning through this session. This gave Russel an alternative model to move forward with and hope for the future. 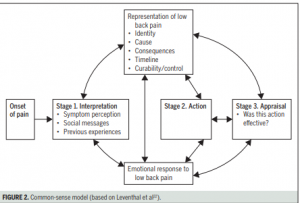 The caveat at the end of this is that Russel had already watched many YouTube clips of Prof O’Sullivan, Professor O’Sullivan is a world leader in his field and the assessment was being done in front of 300 health professional.  This may have altered the patient’s interactions and outcomes. But overall I found watching Professor O’Sullivan interact with Russel as a brilliant learning experience for me and showed that I was heading in the right direction with what I was studying and learning, a huge confirmation bias for me. The next blog will be exploring case formulations like the Commonesense Model and why they can be an important tool in clinic.

Special thanks to Russel for sharing his experience with us.